With data now in from most of the world’s major cargo carriers, handlers, and airports, it looks safe to say that October was another good month for the air freight industry, and will provide a good springboard for this year’s peak season.

It will be a few weeks before accurate November data begins to be reported, but anecdotal evidence indicates that demand is soaring and that charter rates are headed for the stratosphere. For more on the peak, see this report by our European editor, Alex Lennane.

Turning back to October, we note that while most of the rest of world’s carriers enjoyed substantial growth, the big three Western European carriers continued to struggle. And since Europe’s big airports show significant year-over-year increases, we believe that the three carriers are losing market share, not that the market is shrinking. Regarding Latin America, we expect that once the carriers in the Avianca group report their October results it will be clear that the region is seeing significant growth, with Avianca taking market share from LATAM.

Cathay Pacific Airways reported October cargo traffic up 18.7% y-o-y to 927 million RTKs. This is the eighth consecutive month in which Cathay has reported monthly year-over-year jumps of between 16% and 21% (after a flat January and February), and the carrier’s cargo traffic for the first ten months of 2014 was up 15.0% to 8.11 billion RTKs. Commenting on the September performance, Cathay Pacific General Manager Cargo Sales & Marketing Mark Sutch said: “The airfreight markets remained buoyant in October and we saw a continued surge in demand out of Hong Kong and Mainland China, which was still being driven by shipments of consumer IT products. North America remains the focus of our business and we strengthened our network further last month with the launch of a new freighter service to Calgary and increased frequencies into Mexico. Intra-Asia freight is an increasingly important part of our business and we will launch a new twice-weekly service to Phnom Penh this month to capture more of the demand.”

Hong Kong International Airport reported cargo volume in October up 4.3% y-o-y to 383,000 tonnes. Export volume was up 3.4% to 248,000 tonnes, while import volume was up 5.9% to 135,000 tonnes. For the year through October, HKIA’s handle was up 6.5% to 3.57 million tonnes. Commenting on the July results, HKIA said: “The growth in cargo throughput last month was mainly driven by 15% year-on-year growth in transshipments. During the month, cargo throughput to/from North America and Southeast Asia increased most significantly compared to other key regions.”

Shanghai Pudong International Airport Cargo Terminals Co. Ltd (Pactl, the biggest cargo handler at PVG) reported its October handle up 17.1% to 139,000 tonnes, continuing Pactl’s pattern of strong growth in 2014. For October, Pactl’s international volume was up 17.3% to 131,000 tonnes, while the much smaller domestic volume was up 13.8% to 9,000 tonnes (most of Shanghai’s domestic cargo moves through nearby Hongqiao Airport). For the year through October, Pactl’s handle was up 16.6% to 1.22 million tonnes.

Singapore Airlines reported October cargo traffic down 2.8% y-o-y to 530 million RTKs, continuing its long-term trend of mid-single-digit declines. For the year through October, SIA’s cargo traffic was down 3.6% to 5.19 billion RTKs.

Amsterdam’s Schiphol Airport continues to report solid gains, with its October handle up 7.7% to 145,000 tonnes. For the first nine months of the year, AMS’ handle was up 8.0% to 1.36 million tonnes.

LATAM Airlines Group reported October cargo traffic up 1.5% y-o-y to 349 million RTKs – hardly a spectacular result, but a definite improvement over the trend of declining cargo traffic reported so far this year. Commenting on the result, the company said the cargo traffic increase was driven by strong seasonal exports from Latin America. LATAM also noted that cargo capacity was down 2.3%, “a result of decreased availability in the bellies of passenger aircraft in addition to a reduced freighter operation.” For the first ten months of the year, LATAM’s cargo traffic was down 3.0% to 3.55 billion RTKs.

United Airlines reported October cargo traffic up 15.8% to 332 million RTKs. This marks the twelfth month of a turnaround that started in November 2013. Prior to that point, United had for some time been reporting what may have been the worst results for any major cargo carrier in the world. Its cargo traffic for the first ten months of 2013 was down over 12% from 2012, and 2012 itself was a terrible year. Until July, the carrier’s cargo traffic growth during the turnaround was in the mid-single-digit range, but July saw a jump of almost 30%, and clearly, whatever fueled that jump carried on through August and September (up 25.8% and 23.2%, respectively). For the first ten months of 2014, United’s cargo traffic was up 12.7% to 2.98 billion RTKs.

American Airlines Group reported October cargo traffic up 4.9% to 312 million RTKs. As is the case with United, this is a continuation of a trend of growth, although for American the growth began earlier and was, until three months ago, stronger. The August gain of 1.7% and September’s 2.2%, as well as October’s 4.9%,  are well below the average gain American has been reporting over the previous eighteen months. For the year through October, American’s cargo traffic was up 7.2% to 2.83 billion RTKs. 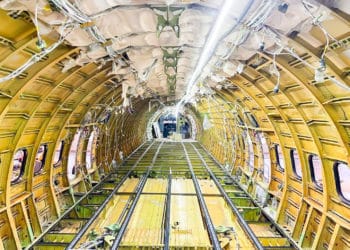